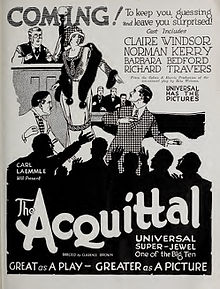 The judgment of a court that a person charged with a crime is not guilty.