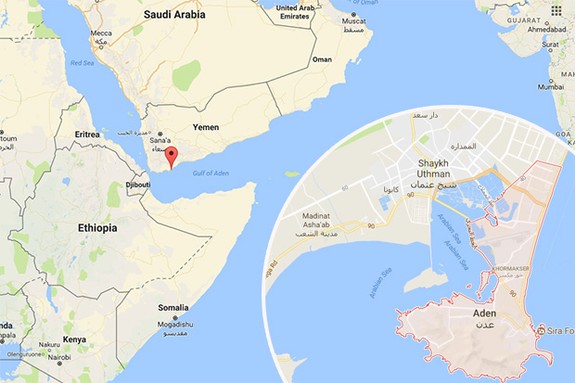 place in southern Arabia, ultimately from Akkadian edinnu “plain,” which some think also is the root of Biblical Eden.

southwestern region of Arabia, from Arabic Yemen, literally “the country of the south,” from yaman “right side” (i.e., south side, if one is facing east). The right side regarded as auspicious, hence Arabic yamana “he was happy,” literally “he went to the right,” and hence the Latin name for the region in Roman times, Arabia Felix, lit, “Happy Arabia.”

Capital and chief port of Yemen, located on the Gulf of Aden, near the southwest corner of the Arabian Peninsula and the southern entrance of the Red Sea.

Now the Republic of Yemen. Yemen is at the mouth of the Red Sea, in the southwestern corner of the Arabian Peninsula, bordered by Saudi Arabia to the north and Oman to the east; formerly divided into North Yemen (the Yemen Arab Republic) and the People’s Democratic Republic of Yemen.