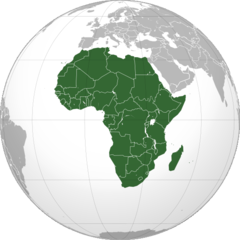 Latin Africa (terra) “African land, Libya, the Carthaginian territory,” fem. of Africus, from Afer “an African.” Originally only in reference to the region around modern Tunisia, it gradually was extended to the whole continent. Derivation from Arabic afar “dust, earth” is tempting, but the early date seems to argue against it. The Middle English word was Affrike.

The second-largest continent, after Asia; located south of Europe and bordered to the west by the Atlantic Ocean and to the east by the Indian Ocean.