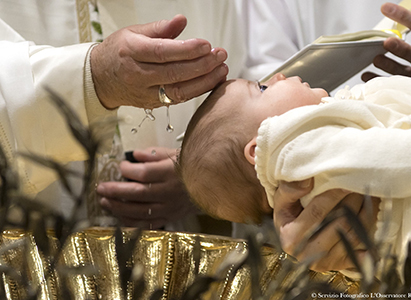 Figurative sense is from late 14c. The Anglo-Saxons used fulluht in this sense (John the Baptist was Iohannes se Fulluhtere). Phrase baptism of fire “a soldier’s first experience of battle” (1857) translates French baptême de feu; the phrase originally was ecclesiastical Greek baptisma pyros and meant “the grace of the Holy Spirit as imparted through baptism.” Later it was used of martyrdom, especially by burning.

The ceremony of initiation into Christianity; in most Christian churches, it is considered a sacrament. Persons baptized either have water poured on them or are immersed in water; some groups of Christians (see also Christian) insist on immersion. The effect of baptism, in Christian belief, is to cleanse persons of their sins, so that they are born into a new life with Jesus. Most churches baptize members when they are infants, but some groups, like the Baptists, insist on adult baptism. Jesus himself was baptized. (See John the Baptist.)