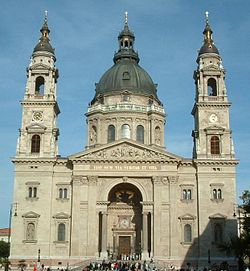 1540s, from Latin basilica “building of a court of justice,” and, by extension, church built on the plan of one, from Greek (stoa) basilike “royal (portal),” the portico of the archon basileus, the official who dispensed justice in Athens, from basileus “king” (see Basil). In Rome, applied specifically to the seven principal churches founded by Constantine.

A large Roman Catholic or Eastern Orthodox church building. A basilica is built with several parallel aisles separated by rows of columns, ending in a semicircular structure, the apse. Saint Peter’s Basilica is the church of the Vatican in Rome.