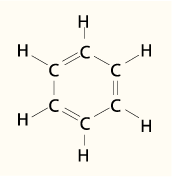 1835, benzine, altered from German Benzin, coined in 1833 by German chemist Eilhardt Mitscherlich (1794-1863) from Benz(oesäure) “benzoic acid” + -ene (German -in), hydrocarbon suffix. Mitscherlich obtained it from a distillation of benzoic acid, obtained from benzoin. The form benzene dates from 1872 in English. In 19c. it also sometimes was called benzol. Faraday was first to discover the compound (in fish oil) and called it bicarburet of hydrogen.