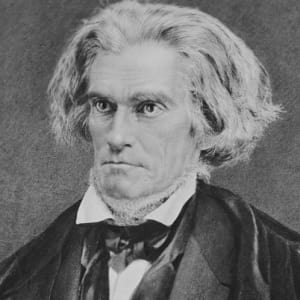 The leading southern politician of the early nineteenth century; he served as vice president under both John Quincy Adams and Andrew Jackson and then was elected senator from South Carolina. Calhoun championed slavery and states’ rights. During the early 1830s, he led the nullification movement, which maintained that when a state found a federal law unacceptable, the state had the right to declare the law null, or inoperative, within its borders. Nullification was aimed particularly at the high protective tariff of 1828; Calhoun opposed protective tariffs. A man of powerful intellect, Calhoun increasingly became obsessed with the South’s minority status and with finding ways to protect slavery. Although he died in 1850, his influence helped point the South toward secession and the Civil War.