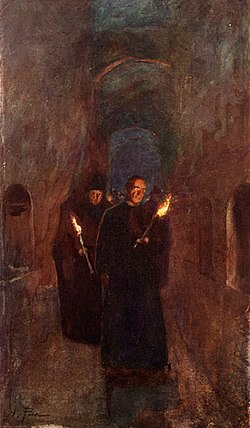 usually catacombs, from Old English catacumbas, from Late Latin (400 C.E.) catacumbae (plural), originally the region of underground tombs between the 2nd and 3rd milestones of the Appian Way (where the bodies of apostles Paul and Peter, among others, were said to have been laid), origin obscure, perhaps once a proper name, or dissimilation from Latin cata tumbas “at the graves,” from cata- “among” + tumbas. accusative plural of tumba “tomb” (see tomb).

If so, the word perhaps was altered by influence of Latin -cumbere “to lie.” From the same source are French catacombe, Italian catacomba, Spanish catacumba. Extended by 1836 in English to any subterranean receptacle of the dead (as in Paris). Related: Catacumbal.