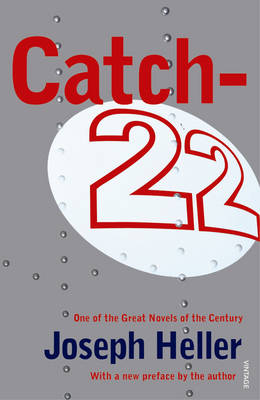 There was only one catch and that was Catch-22, which specified that a concern for one’s safety in the face of dangers that were real and immediate was the process of a rational mind. Orr was crazy and could be grounded. All he had to do was ask; and as soon as he did, he would no longer be crazy and would have to fly more missions. Orr would be crazy to fly more missions and sane if he didn’t, but if he was sane he had to fly them. If he flew them he was crazy and didn’t have to; but if he didn’t want to he was sane and had to. Yossarian was moved very deeply by the absolute simplicity of this clause of Catch-22 and let out a respectful whistle.

“It’s the best there is,” Doc Daneeka agreed.

(1961) A war novel by the American author Joseph Heller. “Catch-22” is a provision in army regulations; it stipulates that a soldier’s request to be relieved from active duty can be accepted only if he is mentally unfit to fight. Any soldier, however, who has the sense to ask to be spared the horrors of war is obviously mentally sound, and therefore must stay to fight.

A no-win dilemma or paradox, similar to damned if I do, damned if I don’t. For example, You can’t get a job without experience, but you can’t get experience unless you have a job—it’s Catch-22. The term gained currency as the title of a 1961 war novel by Joseph Heller, who referred to an Air Force rule whereby a pilot continuing to fly combat missions without asking for relief is regarded as insane, but is considered sane enough to continue flying if he does make such a request.