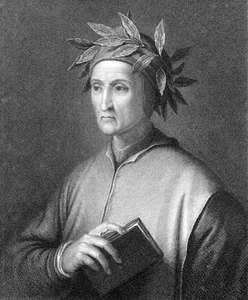 masc. proper name, most modern uses outside Italy ultimately are in reference to Dante Alighieri (c.1265-1321), the great poet; the name is a shortening of Latin Durante, from durare “harden, endure” (see endure).

An Italian poet of the thirteenth and fourteenth centuries; his full name was Dante Alighieri. Dante is remembered for his masterpiece, The Divine Comedy, an epic about hell, purgatory, and heaven. The Divine Comedy was written as a memorial to Beatrice, a woman whom Dante loved and who died at an early age.