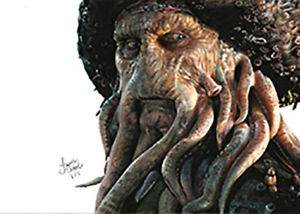 “the spirit of the sea,” 1751, first mentioned in Smollett’s “The Adventures of Peregrin Pickle” (chapter 15) as an ominous and terrifying fiend who “presides over all the evil spirits of the deep, and is often seen in various shapes, perching among the rigging on the eve of hurricanes, shipwrecks and other disasters.” Davy Jones’s Locker “bottom of the sea,” is 1803, from nautical slang, of unknown origin; second element may be from biblical Jonah, regarded as unlucky by sailors.