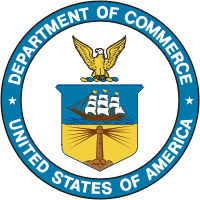 A department of the federal executive branch whose responsibilities include management of the census and the United States Patent Office. Through a variety of bureaus and agencies, such as the Industry and Trade Administration and the Office of Minority Business Enterprise, the Department of Commerce works to promote American business interests at home and abroad.