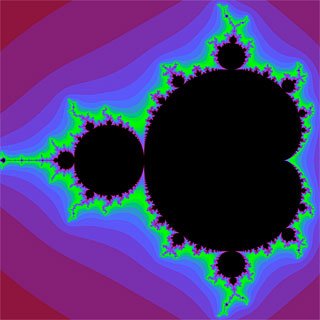 fractal [frak-tl] WORD ORIGIN noun Mathematics, Physics. a geometrical or physical structure having an irregular or fragmented shape at all scales of measurement between a greatest and smallest scale such that certain mathematical or physical properties of the structure, as the perimeter of a curve or the flow rate in a porous medium, behave as if the dimensions of the structure (fractal dimensions) are greater than the spatial dimensions. Liberaldictionary.com

Many important spatial patterns of Nature are either irregular or fragmented to such an extreme degree that … classical geometry … is hardly of any help in describing their form. … I hope to show that it is possible in many cases to remedy this absence of geometric representation by using a family of shapes I propose to call fractals — or fractal sets. [Mandelbrot, “Fractals,” 1977] Online Etymology Dictionary, © 2010 Douglas Harper fractal in Science fractal [frăk′təl] A complex geometric pattern exhibiting self-similarity in that small details of its structure viewed at any scale repeat elements of the overall pattern. See more at chaos. A Closer Look: Fractals are often associated with recursive operations on shapes or sets of numbers, in which the result of the operation is used as the input to the same operation, repeating the process indefinitely. The operations themselves are usually very simple, but the resulting shapes or sets are often dramatic and complex, with interesting properties. For example, a fractal set called a Cantor dust can be constructed beginning with a line segment by removing its middle third and repeating the process on the remaining line segments. If this process is repeated indefinitely, only a dust of points remains. This set of points has zero length, even though there is an infinite number of points in the set. The Sierpinski triangle (or Sierpinski gasket) is another example of such a recursive construction procedure involving triangles (see the illustration). Both of these sets have subparts that are exactly the same shape as the entire set, a property known as self-similarity. Under certain definitions of dimension, fractals are considered to have non-integer dimension: for example, the dimension of the Sierpinski triangle is generally taken to be around 1.585, higher than a one-dimensional line, but lower than a two-dimensional surface. Perhaps the most famous fractal is the Mandelbrot set, which is the set of complex numbers C for which a certain very simple function, Z2 + C, iterated on its own output (starting with zero), eventually converges on one or more constant values. Fractals arise in connection with nonlinear and chaotic systems, and are widely used in computer modeling of regular and irregular patterns and structures in nature, such as the growth of plants and the statistical patterns of seasonal weather. The American Heritage® Science Dictionary Copyright © 2011. Published by Houghton Mifflin Harcourt Publishing Company. All rights reserved. fractal in Culture fractal [(frak-tuhl)]

Contraction of “fractional dimension.” This is a term used by mathematicians to describe certain geometrical structures whose shape appears to be the same regardless of the level of magnification used to view them. A standard example is a seacoast, which looks roughly the same whether viewed from a satellite or an airplane, on foot, or under a magnifying glass. Many natural shapes approximate fractals, and they are widely used to produce images in television and movies.