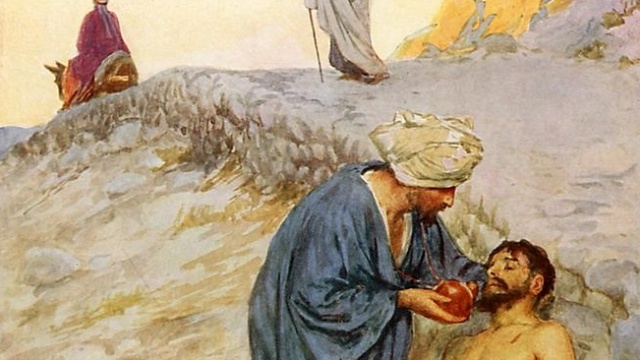 In one of the parables of Jesus, the only one of several passersby to come to the aid of a Jew (see also Jews) who had been robbed, beaten, and left to die on the roadside. The kindness of the Samaritan was particularly admirable because Jews and Samaritans (i.e., people of Samaria) were generally enemies. Jesus told the parable of the Good Samaritan to answer a man who had asked him, “Who is my neighbor?” He forced his questioner to admit that the Samaritan was the true neighbor of the man who had been robbed.

Note Figuratively, “Good Samaritans” are persons who go out of their way to perform acts of kindness to others, especially strangers. Idioms and Phrases with good samaritan good Samaritan

A compassionate person who unselfishly helps others, as in In this neighborhood you can’t count on a good Samaritan if you get in trouble. This expression alludes to Jesus’s parable about a Samaritan who rescues and cares for a stranger who had been robbed and badly hurt and had been ignored by a priest and a Levite (Luke 10:30–35). The Samaritans were considered a heretical group by other Jews, so by using a Samaritan for the parable, Jesus chose a person whom his listeners would find least likely to be worthy of concern. [c. 1600]