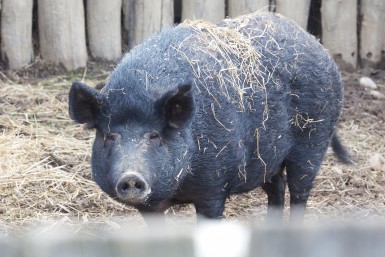 late 12c. (implied in hogaster), “swine reared for slaughter” (usually about a year old), also used by stockmen for “young sheep” (mid-14c.) and for “horse older than one year,” suggesting the original sense had something to do with an age, not a type of animal. Not evidenced in Old English, but it may have existed. Possibility of British Celtic origin {Watkins, etc.] is regarded by OED as “improbable.” Figurative sense of “gluttonous person” is first recorded early 15c. Meaning “Harley-Davidson motorcycle” is attested from 1967.

To go hog wild is from 1904. Hog in armor “awkward or clumsy person in ill-fitting attire” is from 1650s. Phrase to go the whole hog (1828) is sometimes said to be from the butcher shop option of buying the whole slaughtered animal (at a discount) rather than just the choice bits. But it is perhaps rather from the story (recorded in English from 1779) of Muslim sophists, forbidden by the Quran from eating a certain unnamed part of the hog, who debated which part was intended and managed to exempt the whole of it from the prohibition.

Idioms and Phrases with hog hog