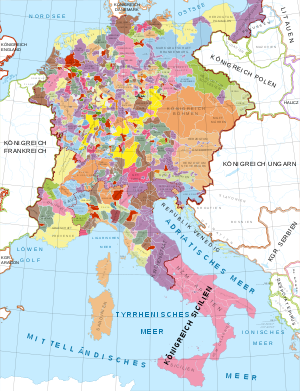 A major political institution in Europe that lasted from the ninth to the nineteenth centuries. It was loosely organized and modeled somewhat on the ancient Roman Empire. It included great amounts of territory in the central and western parts of Europe. Charlemagne was its first emperor. In later years, the emperors were Germans and Austrians. The empire declined greatly in power after the sixteenth century.

Note The eighteenth-century French author Voltaire once wrote that the Holy Roman Empire was “neither holy, Roman, nor an empire.”