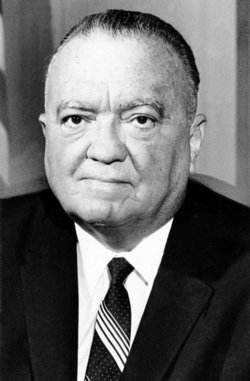 A law enforcement official of the twentieth century. Hoover became the director of the Federal Bureau of Investigation (FBI) in 1924 and stayed in the position until his death in 1972. His time as director was marked by vigorous investigation and prosecution of gangsters, kidnapers, and foreign spies.

Note Hoover’s activities remain controversial. Some praise him as a pioneer in scientific law enforcement, but others say that he abused his power, particularly in his investigation of the supposed influence of communists on the civil rights movement. The New Dictionary of Cultural Literacy, Third Edition Copyright © 2005 by Houghton Mifflin Harcourt Publishing Company. Published by Houghton Mifflin Harcourt Publishing Company. All rights reserved.