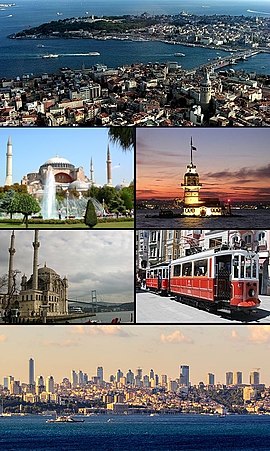 Turkish name of Constantinople, a corruption of Greek phrase eis tan (ten) polin “into the city,” which is how the local Greek population referred to it. Picked up in Turkish 16c., though Turkish folk etymology traces the name to Islam bol “plenty of Islam.” Greek polis “city” has been adopted into Turkish as a place-name suffix as -bolu.

Largest city in Turkey, located in the northwestern part of the country on both sides of the Bosporus.

Note Formerly called Byzantium, then Constantinople, the city was the capital consecutively of the eastern branch of the Roman Empire, of the Byzantine Empire, and of the Ottoman Empire.Note It is the seat of the Eastern Orthodox Church.