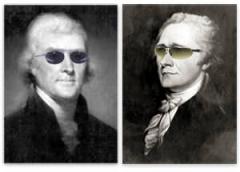 Rival ideals of American government that have persisted long after the deaths of Thomas Jefferson and Alexander Hamilton, after whom they were named. Jeffersonians have preferred a weak federal government and strong state and local governments, on the grounds that lower-level governments will be more responsive than the national government to the popular will. Jeffersonians have also held that the American economy should rely more on agriculture than on industry and have seen big business as a threat to democracy. In contrast, Hamiltonians have insisted that a strong national government is needed to guide the economic development of the nation, especially its industrial development, and to restrain the excesses of the people.