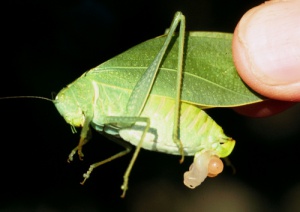 insect of the locust family (Microsentrum rhombifolium), 1784, American English (perhaps first used by John Bartram), imitative of the stridulous sound the male makes when it rubs its front wings together. The sound itself is more accurately transcribed from 1751 as catedidist.