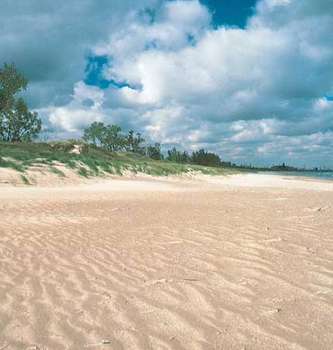 name originally applied to the lake, perhaps from Old Ojibwa (Algonquian) *meshi-gami “big lake.” The spelling is French. Organized as a U.S. territory 1805, admitted as a state 1837. A resident might be a Michigander (1848) or a Michiganian (1813). Lake bordered by Michigan to the north and east, Indiana to the south, and Illinois and Wisconsin to the west. State in the northern United States bordered on the north by Lake Superior; on the east by Lake Erie, Lake Huron, and Ontario, Canada; on the south by Ohio and Indiana; and on the west by Wisconsin and Lake Michigan. Its capital is Lansing, and its largest city is Detroit.