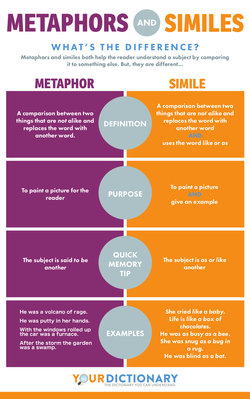 n.late 15c., from Middle French metaphore (Old French metafore, 13c.), and directly from Latin metaphora, from Greek metaphora “a transfer,” especially of the sense of one word to a different word, literally “a carrying over,” from metapherein “transfer, carry over; change, alter; to use a word in a strange sense,” from meta- “over, across” (see meta-) + pherein “to carry, bear” (see infer). The comparison of one thing to another without the use of like or as: “A man is but a weak reed”; “The road was a ribbon of moonlight.” Metaphors are common in literature and expansive speech. (Compare simile.)