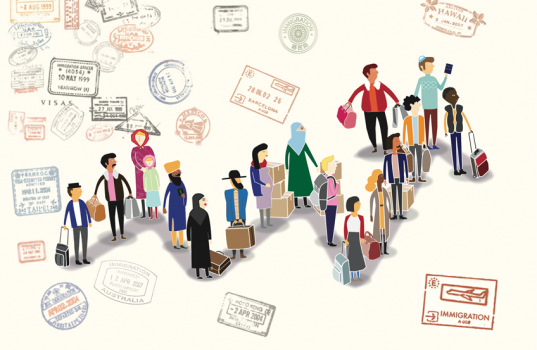 n.1610s, of persons, 1640s of animals, from Latin migrationem (nominative migratio) “a removal, change of abode, migration,” noun of action from past participle stem of migrare “to move from one place to another,” probably originally *migwros, from PIE *meigw- (cf. Greek ameibein “to change”), from root *mei- “to change, go, move” (see mutable). Related: Migrational. That European birds migrate across the seas or to Asia was understood in the Middle Ages, but subsequently forgotten. Dr. Johnson held that swallows slept all winter in the beds of rivers, while the naturalist Morton (1703) stated that they migrated to the moon. As late as 1837 the “Kendal Mercury” “detailed the circumstance of a person having observed several Swallows emerging from Grasmere Lake, in the spring of that year, in the form of ‘bell-shaped bubbles,’ from each of which a Swallow burst forth ….” n.