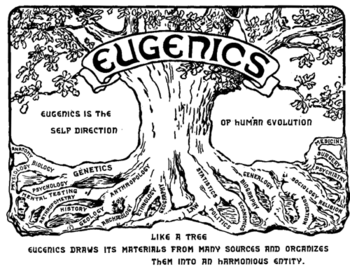 n.1883, coined (along with adjective eugenic) by English scientist Francis Galton (1822-1911) on analogy of ethics, physics, etc. from Greek eugenes “well-born, of good stock, of noble race,” from eu- “good” (see eu-) + genos “birth” (see genus). The investigation of human eugenics, that is, of the conditions under which men of a high type are produced. [Galton, “Human Faculty,” 1883] n.

The idea that one can improve the human race by careful selection of those who mate and produce offspring.