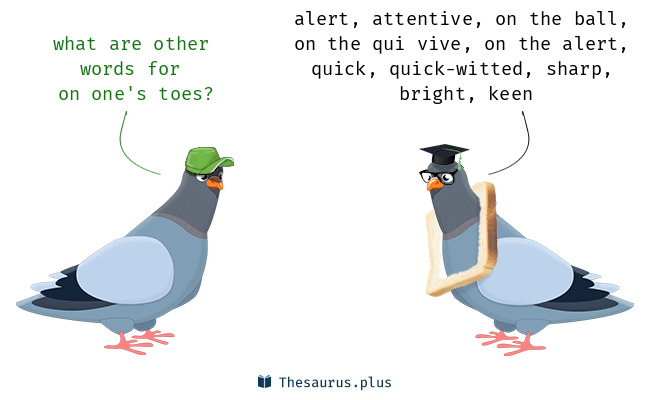 n.Old English ta (plural tan), contraction of *tahe (Mercian tahæ), from Proto-Germanic *taikhwo (cf. Old Norse ta, Old Frisian tane, Middle Dutch te, Dutch teen, Old High German zecha, German Zehe “toe”), probably originally meaning “fingers” as well (many PIE languages still use one word to mean both fingers and toes). The Old English plural tan survived in southwestern England to 14c. To be on (one’s) toes “alert, eager” is recorded from 1921. v.“touch or reach with the toes,” 1813, from toe (n.). First recorded in expression toe the mark, which seems to be nautical in origin. The chief mate … marked a line on the deck, brought the two boys up to it, making them ‘toe the mark.’ [R.H. Dana, “Two Years Before the Mast,” 1840] Related: Toed; toeing. n.

Alert, ready to act, as in Orchestra players must be on their toes all the time, so as not to miss an entrance. This metaphoric expression probably alludes to boxers or runners who must be on their toes in order to move or start quickly. It gained currency with Richard Rodgers’ and Lorenz Hart’s extremely popular musical, On Your Toes (1936). [Early 1900s] In addition to the idiom beginning with toe