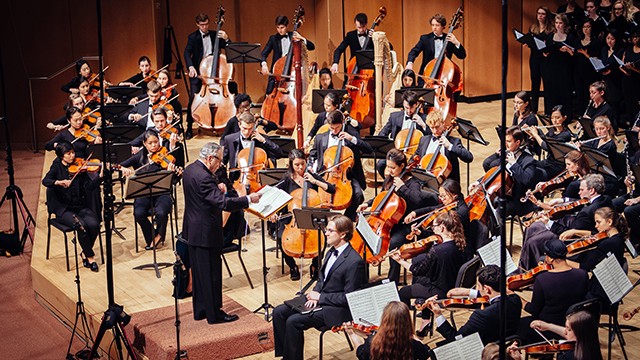 n.c.1600, “area in an ancient theater for the chorus,” from Latin orchestra, from Greek orkhestra, semicircular space where the chorus of dancers performed, with suffix -tra denoting place + orkheisthai “to dance,” intensive of erkhesthai “to go, come,” from PIE *ergh- “to set in motion, stir up, raise” (cf. Sanskrit rghayati “trembles, rages, raves,” rnoti “rises, moves,” arnah “welling stream;” Old Persian rasatiy “he comes;” Greek ornynai “to rouse, start;” Latin oriri “to rise,” origo “a beginning;” Gothic rinnan, Old English irnan “to flow, run”). In ancient Rome, it referred to the place in the theater reserved for senators and other dignitaries. Meaning “group of musicians performing at a concert, opera, etc.” first recorded 1720; “part of theater in front of the stage” is from 1768. A group of musicians who play together on a variety of instruments, which usually come from all four instrument families — brass, percussion, strings, and woodwinds. A typical symphony orchestra is made up of more than ninety musicians. Most orchestras, unlike chamber music groups, have more than one musician playing each musical part.