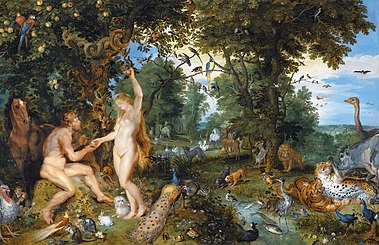 The eating of the forbidden fruit by Adam and Eve in the Garden of Eden, which led to their expulsion from Eden by God. In Christian theology, the act by which all humans fell from divine grace. The sin of Adam and Eve, the essential event of the Fall of Man. According to the most common teaching of Christians (see also Christian), all descendants of Adam and Eve — that is, all people — share in this sin and are, from the time they are conceived, in a state of sin. In German, the term used is Erbsunde, meaning “inherited sin,” a more explanatory term than the English one. Jesus, through his Crucifixion and Resurrection, atoned for original sin. All who believe in Jesus and accept baptism are freed from original sin and experience salvation (see also salvation). (See justification by grace, through faith.)