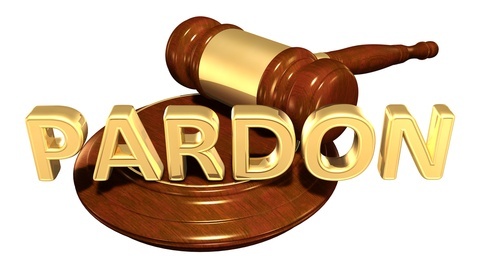 n.late 13c., “papal indulgence,” from Old French pardon, from pardoner “to grant; forgive” (11c., Modern French pardonner), “to grant, forgive,” from Vulgar Latin *perdonare “to give wholeheartedly, to remit,” from Latin per- “through, thoroughly” (see per) + donare “give, present” (see donation). Meaning “passing over an offense without punishment” is from c.1300, also in the strictly ecclesiastical sense; sense of “pardon for a civil or criminal offense; release from penalty or obligation” is from late 14c. earlier in Anglo-French. Weaker sense of “excuse for a minor fault” is attested from 1540s. v.mid-15c., “to forgive for offense or sin,” from Old French pardoner (see pardon (n.)). ‘I grant you pardon,’ said Louis XV to Charolais, who, to divert himself, had just killed a man; ‘but I also pardon whoever will kill you.’ [Marquis de Sade, “Philosophy in the Bedroom”] Related: Pardoned; pardoning. Pardon my French as exclamation of apology for obscene language is from 1895. see beg to differ; excuse me.