pay as you go 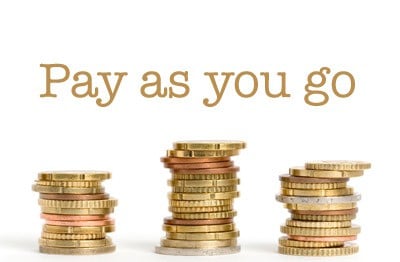 v.c.1200, “to appease, pacify, satisfy,” from Old French paier “to pay, pay up” (12c., Modern French payer), from Latin pacare “to please, pacify, satisfy” (in Medieval Latin especially “satisfy a creditor”), literally “make peaceful,” from pax (genitive pacis) “peace” (see peace). Meaning “to give what is due for goods or services” arose in Medieval Latin and was attested in English by early 13c.; sense of “please, pacify” died out in English by 1500. Sense of “suffer, endure” (a punishment, etc.) is first recorded late 14c. Related: Paid; paying. n.c.1300, “satisfaction, liking, reward,” from pay (v.), or else from Old French paie “payment, recompense,” from paier. Meaning “money given for labor or services, wages” is from late 14c. Pay for purchases immediately instead of deferring payment. For example, Ruth and Bob had no credit cards; they believed in paying as you go. [First half of 1800s] In addition to the idioms beginning with pay