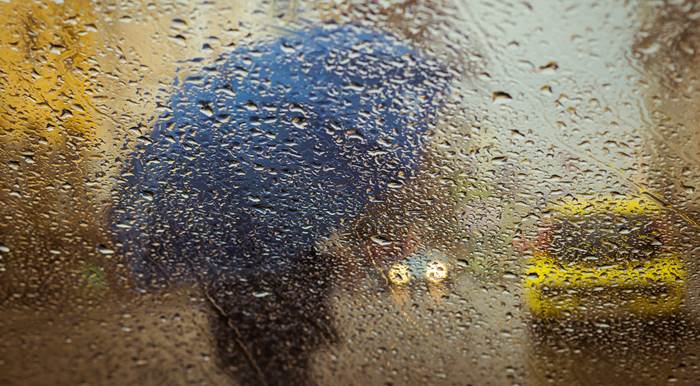 Old English regn “rain,” from Proto-Germanic *regna- (cf. Old Saxon regan, Old Frisian rein, Middle Dutch reghen, Dutch regen, German regen, Old Norse regn, Gothic rign “rain”), with no certain cognates outside Germanic, unless it is from a presumed PIE *reg- “moist, wet,” which may be the source of Latin rigare “to wet, moisten” (cf. irrigate). Rain dance is from 1867; rain date in listings for outdoor events is from 1948. To know enough to come in out of the rain (usually with a negative) is from 1590s. Rainshower is Old English renscur.

To rain on (someone’s) parade is attested from 1941. Phrase to rain cats and dogs is attested from 1738 (variation rain dogs and polecats is from 1650s), of unknown origin, despite intense speculation. One of the less likely suggestions is pets sliding off sod roofs when the sod got too wet during a rainstorm. (Ever see a dog react to a rainstorm by climbing up on an exposed roof?) Probably rather an extension of cats and dogs as proverbial for “strife, enmity” (1570s).

In addition to the idioms beginning with rain