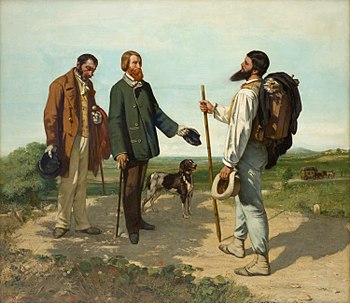 1794, from real (adj.) + -ism; after French réalisme or German Realismus; from Late Latin realis “real.” Opposed to idealism in philosophy, art, etc. In reference to scholastic doctrine of Thomas Aquinas (opposed to nominalism) it is recorded from 1826. Meaning “close resemblance to the scene” (in art, literature, etc., often with reference to unpleasant details) is attested from 1856.

An approach to philosophy that regards external objects as the most fundamentally real things, with perceptions or ideas as secondary. Realism is thus opposed to idealism. Materialism and naturalism are forms of realism. The term realism is also used to describe a movement in literature that attempts to portray life as it is.

An attempt to make art and literature resemble life. Realist painters and writers take their subjects from the world around them (instead of from idealized subjects, such as figures in mythology or folklore) and try to represent them in a lifelike manner.