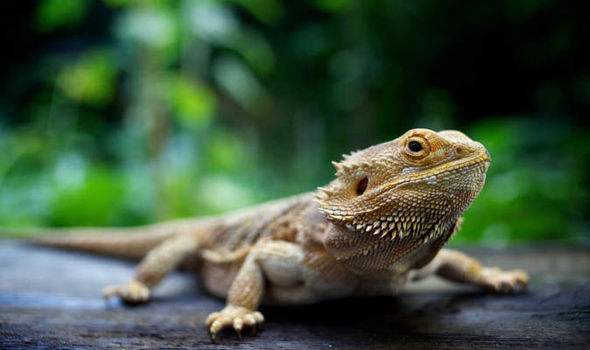 late 14c., “creeping or crawling animal,” from Old French reptile (early 14c.) and directly from Late Latin reptile, noun use of neuter of reptilis (adj.) “creping, crawling,” from rept-, past participle stem of repere “to crawl, creep,” from PIE root *rep- “to creep, crawl” (cf. Lithuanian replioju “to creep”). Used of persons of low character from 1749.

Precise scientific use began to develop mid-18c., but the word was used as well at first of animals now known as amphibians, including toads, frogs, salamanders; separation of Reptilia (1835 as a distinct class) and Amphibia took place early 19c.; popular use lagged, and reptile still was used late 18c. with sense “An animal that creeps upon many feet” [Johnson, who calls the scorpion a reptile], sometimes excluding serpents.

And the terrestrial animals may be divided into quadrupeds or beasts, reptiles, which have many feet, and serpents, which have no feet at all. [Locke, “Elements of Natural Philosophy,” 1689]

An inadvertent step may crush the snail
That crawls at ev’ning in the public path ;
But he that has humanity, forewarn’d,
Will tread aside, and let the reptile live.
[Cowper, “The Task,” 1785]

The Old English word for “reptile” was slincend, related to slink.