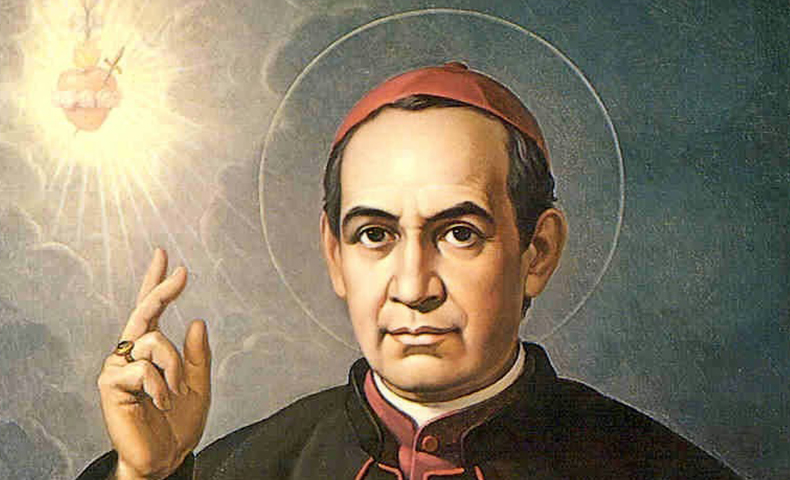 n.early 12c., from Old French saint, seinte “a saint; a holy relic,” displacing or altering Old English sanct, both from Latin sanctus “holy, consecrated” (used as a noun in Late Latin; also source of Spanish santo, santa, Italian san, etc.), properly past participle of sancire “consecrate” (see sacred). Adopted into most Germanic languages (cf. Old Frisian sankt, Dutch sint, German Sanct). Originally an adjective prefixed to the name of a canonized person; by c.1300 it came to be regarded as a noun. Meaning “person of extraordinary holiness” is recorded from 1560s. Saint, n. A dead sinner revised and edited. The Duchess of Orleans relates that the irreverent old calumniator, Marshal Villeroi, who in his youth had known St. Francis de Sales, said, on hearing him called saint: ‘I am delighted to hear that Monsieur de Sales is a saint. He was fond of saying indelicate things, and used to cheat at cards. In other respects he was a perfect gentleman, though a fool.’ [Ambrose Bierce, “Devil’s Dictionary,” 1911] Perhaps you have imagined that this humility in the saints is a pious illusion at which God smiles. That is a most dangerous error. It is theoretically dangerous, because it makes you identify a virtue (i.e., a perfection) with an illusion (i.e., an imperfection), which must be nonsense. It is practically dangerous because it encourages a man to mistake his first insights into his own corruption for the first beginnings of a halo round his own silly head. No, depend upon it; when the saints say that they–even they–are vile, they are recording truth with scientific accuracy. [C.S. Lewis, “The Problem of Pain,” 1940] Applied widely to living things, diseases, objects and phenomena, e.g. Saint Bernard, the breed of mastiff dogs (1839), so called because they were used by the monks of the hospice of the pass of St. Bernard (between Italy and Switzerland) to rescue snowbound travelers; St. Elmo’s Fire “corposant” (1560s) is from Italian fuoco di Sant’Elmo, named for the patron saint of Mediterranean sailors, a corruption of the name of St. Erasmus, an Italian bishop martyred in 303. v.“to enroll (someone) among the saints,” late 14c., from saint (n.). Related: Sainted; sainting. In Christianity, a holy person, living or dead; a person who has been saved (see salvation) (see also salvation). Saint is the French word for “holy.” Many churches reserve the title of saint for persons who have died faithful to their Christian commitment. The Roman Catholic Church and the Eastern Orthodox Church require certain procedures before people can be officially named saints; this procedure is called canonization.