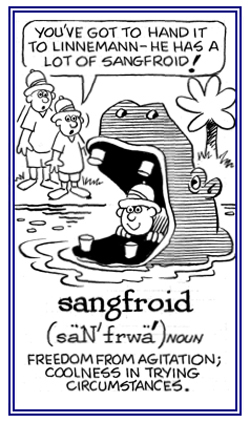 n.“presence of mind, composure,” 1712, from French sang froid, literally “cool blood,” from sang “blood” (from Latin sanguis; see sanguinary) + froid “cold” (from Latin frigidus; see frigid). Composure in the face of difficulty or danger: “We would all be dead today if our bus driver hadn’t kept his sangfroid when the bus began to skid on the ice.” From French, meaning “cold blood.”