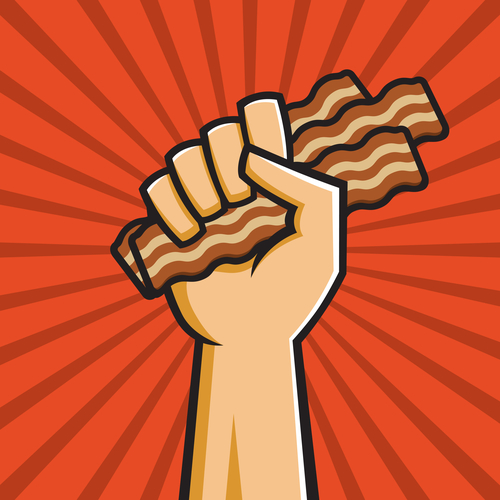 n.early 14c., “meat from the back and sides of a pig” (originally either fresh or cured, but especially cured), from Old French bacon, from Proto-Germanic *bakkon “back meat” (cf. Old High German bahho, Old Dutch baken “bacon”). Slang phrase bring home the bacon first recorded 1908; bacon formerly being the staple meat of the working class.

Also, save one’s neck or skin. Rescue one from a difficult situation or harm, as in I was having a hard time changing the flat tire but along came Bud, who saved my bacon, or The boat capsized in icy waters, but the life preservers saved our skins. The allusion in the first term is no longer clear. It may simply be a comical way of referring to one’s body or one’s life. At the time it was first recorded, in 1654, bacon was a prized commodity, so perhaps saving one’s bacon was tantamount to keeping something precious. Both variants allude to saving one’s life, the one with skin dating from the early 1500s, and with neck, alluding to beheading, from the late 1600s. see bring home the bacon; save one’s bacon.