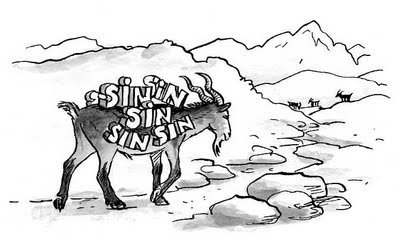 n.1530, “goat sent into the wilderness on the Day of Atonement, symbolic bearer of the sins of the people,” coined by Tyndale from scape (n.) + goat to translate Latin caper emissarius, itself a translation in Vulgate of Hebrew ‘azazel (Lev. xvi:8,10,26), which was read as ‘ez ozel “goat that departs,” but which others hold to be the proper name of a devil or demon in Jewish mythology (sometimes identified with Canaanite deity Aziz). Jerome’s reading also was followed by Martin Luther (der ledige Bock), Symmachus (tragos aperkhomenos), and others (cf. French bouc émissaire), but the question of who, or what (or even where) is meant by ‘azazel is a vexed one. The Revised Version (1884) simply restores Azazel. But the old translation has its modern defenders: Azazel is an active participle or participial noun, derived ultimately from azal (connected with the Arabic word azala, and meaning removed), but immediately from the reduplicate form of that verb, azazal. The reduplication of the consonants of the root in Hebrew and Arabic gives the force of repetition, so that while azal means removed, azalzal means removed by a repetition of acts. Azalzel or azazel, therefore, means one who removes by a series of acts. … The interpretation is founded on sound etymological grounds, it suits the context wherever the word occurs, it is consistent with the remaining ceremonial of the Day of Atonement, and it accords with the otherwise known religious beliefs and symbolical practices of the Israelites. [Rev. F. Meyrick, “Leviticus,” London, 1882] Meaning “one who is blamed or punished for the mistakes or sins of others” first recorded 1824; the verb is attested from 1943. Related: Scapegoated; scapegoating. For the formation, cf. scapegrace, also scape-gallows “one who deserves hanging.” A person or group that is made to bear blame for others. According to the Old Testament, on the Day of Atonement, a priest would confess all the sins of the Israelites over the head of a goat and then drive it into the wilderness, symbolically bearing their sins away.