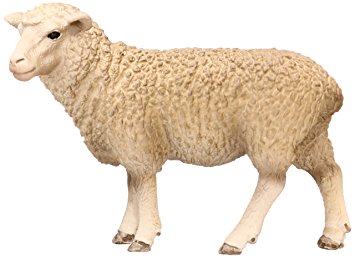 n.ruminant mammal, Old English sceap, scep, from West Germanic *skæpan (cf. Old Saxon scap, Old Frisian skep, Middle Low German schap, Middle Dutch scaep, Dutch schaap, Old High German scaf, German Schaf), of unknown origin. Not found in Scandinavian (cf. Danish faar “sheep”) or Gothic (which uses lamb), and with no known cognates outside Germanic. The more usual Indo-European word for the animal is represented in English by ewe. The plural form was leveled with the singular in Old English, but Old Northumbrian had a plural scipo. Used since Old English as a type of timidity and figuratively of those under the guidance of God. The meaning “stupid, timid person” is attested from 1540s. The image of the wolf in sheep’s clothing was in Old English (from Matt. vii:15); that of separating the sheep from the goats is from Matt. xxv:33. To count sheep in a bid to induce sleep is recorded from 1854 but seems not to have been commonly written about until 1870s. It might simply be a type of a tedious activity, but an account of shepherd life from Australia from 1849 [“Sidney’s Emigrant’s Journal”] describes the night-shepherd (“hut-keeper”) taking a count of the sheep regularly at the end of his shift to protect against being answerable for any animals later lost or killed. Sheep’s eyes “loving looks” is attested from 1520s (cf. West Frisian skiepseach, Dutch schaapsoog, German Schafsauge). A sheep-biter was “a dog that worries sheep” (1540s); “a mutton-monger” (1590s); and “a whore-monger” (1610s, i.e. one who “chases mutton”); hence Shakespeare’s sheep-biting “thieving, sneaky.” see black sheep; hanged for a sheep; separate the sheep from the goats; wolf in sheep’s clothing.