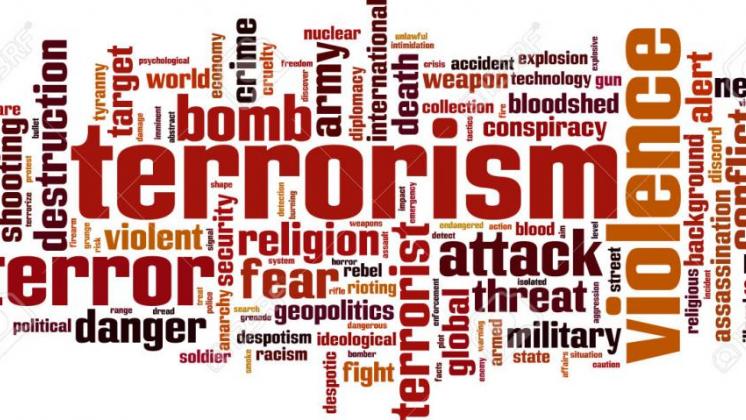 n.1795, in specific sense of “government intimidation during the Reign of Terror in France” (March 1793-July 1794), from French terrorisme, from Latin terror (see terror). If the basis of a popular government in peacetime is virtue, its basis in a time of revolution is virtue and terror — virtue, without which terror would be barbaric; and terror, without which virtue would be impotent. [Robespierre, speech in French National Convention, 1794] General sense of “systematic use of terror as a policy” is first recorded in English 1798. At one time, a word for a certain kind of mass-destruction terrorism was dynamitism (1883); and during World War I frightfulness (translating German Schrecklichkeit) was used in Britain for “deliberate policy of terrorizing enemy non-combatants.” Acts of violence committed by groups that view themselves as victimized by some notable historical wrong. Although these groups have no formal connection with governments, they usually have the financial and moral backing of sympathetic governments. Typically, they stage unexpected attacks on civilian targets, including embassies and airliners, with the aim of sowing fear and confusion. Israel has been a frequent target of terrorism, but the United States has increasingly become its main target. (See also September 11 attacks, Osama bin Laden, Hezbollah, and Basque region.)