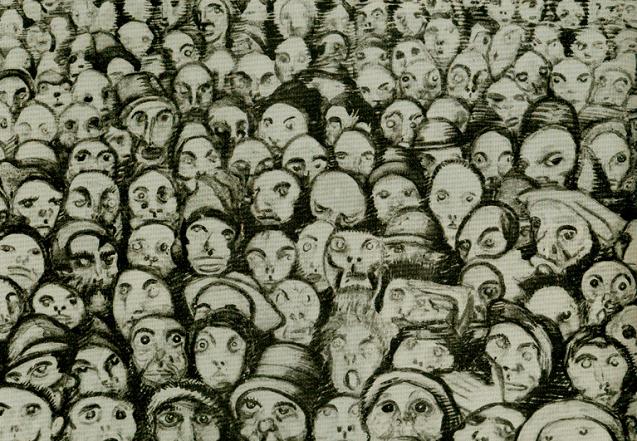 v.“to gather in a mass” (intransitive), 1560s, from mass (n.1) or from French masser. Transitive sense by c.1600. Related: Massed; massing. n.1“lump, quantity, size,” late 14c., from Old French masse “lump, heap, pile; crowd, large amount; ingot, bar” (11c.), and directly from Latin massa “kneaded dough, lump, that which adheres together like dough,” probably from Greek maza “barley cake, lump, mass, ball,” related to massein “to knead,” from PIE root *mag- “to knead” (cf. Lithuanian minkyti “to knead,” see macerate). Sense extended in English 1580s to “a large quantity, amount, or number.” Strict sense in physics is from 1704. As an adjective from 1733, first attested in mass meeting in American English. mass culture is from 1916 in sociology (earlier in biology); mass hysteria is from 1914; mass media is from 1923; mass movement is from 1897; mass production is from 1920; mass grave is from 1918; mass murder from 1880. n.2“Eucharistic service,” Old English mæsse, from Vulgar Latin *messa “eucharistic service,” literally “dismissal,” from Late Latin missa “dismissal,” fem. past participle of mittere “to let go, send” (see mission); probably so called from the concluding words of the service, Ite, missa est, “Go, (the prayer) has been sent,” or “Go, it is the dismissal.” n.

The common name in the Roman Catholic Church, and among some members of the Anglican Communion, for the sacrament of Communion. In music, a musical setting for the texts used in the Christian Church at the celebration of the Mass, or sacrament of Communion. Most Masses have been written for use in the Roman Catholic Church. In physics, the property of matter that measures its resistance to acceleration. Roughly, the mass of an object is a measure of the number of atoms in it. The basic unit of measurement for mass is the kilogram. (See Newton’s laws of motion; compare weight.) The body of common people, or people of low socioeconomic status, as in TV sitcoms are designed to appeal to the masses. This idiom is nearly always used in a snobbish context that puts down the taste, intelligence, or some other quality of the majority of people. W.S. Gilbert satirized this view in the peers’ march in Iolanthe (1882), in which the lower-middle class and the masses are ordered to bow down before the peers. Prime Minister William Gladstone took a different view (Speech, 1886): “All the world over, I will back the masses against the [upper] classes.” [First half of 1800s]