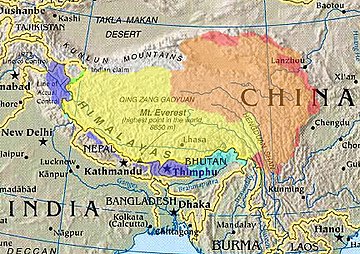 said to be a corruption in Chinese or Arabic of Bod, indigenous name, of unknown origin. As an adjective in English, Tibetian is older (1747) but Tibetan (1822) is now the usual word. Region in southwestern China, bordered by Burma to the southeast; India, Bhutan, and Nepal to the south; India to the west; and Chinese provinces to the north and east. Located in the Himalayas.