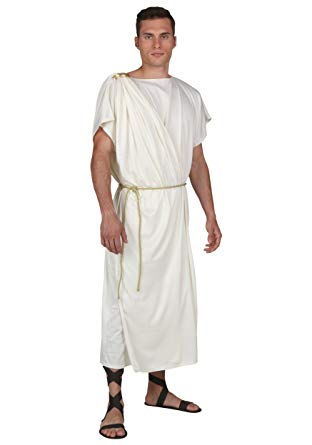 The outer garment of a Roman citizen in time of peace; toga prætexta had a broad purple border and was worn by children, magistrates, persons engaged in sacred rites, and later also emperors; toga virilis, the “toga of manhood,” was assumed by boys at puberty.

Breeches, like the word for them (Latin bracae) were alien to the Romans, the dress of Persians, Germans and Gauls, so that bracatus “wearing breeches” was a term in Roman geography meaning “north of the Alps.” College fraternity toga party popularized by movie “Animal House” (1978), but this is set in 1962.

An outer garment for men in ancient Rome, worn as a sign of citizenship. The toga was a nearly semicircular piece of wool, worn draped about the shoulders and body.