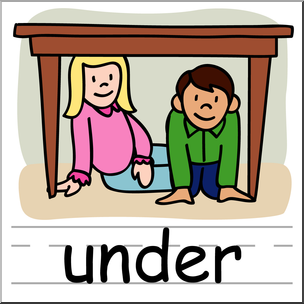 prep., adv.Old English under, from Proto-Germanic *under- (cf. Old Frisian under, Dutch onder, Old High German untar, German unter, Old Norse undir, Gothic undar), from PIE *ndhero- “lower” (cf. Sanskrit adhah “below;” Avestan athara- “lower;” Latin infernus “lower,” infra “below”). Notion of “subordination” was present in Old English Also used in Old English as a preposition meaning “between, among,” as still in under these circumstances, etc. (though this may be an entirely separate root; see understand). Productive as a prefix in Old English, as in German and Scandinavian. Under the table is from 1921 in the sense of “very drunk,” 1940s in sense of “illegal.” To get something under (one’s) belt is from 1954; to keep something under (one’s) hat “secret” is from 1885; to have something under (one’s) nose “in plain sight” is from 1540s; to speak under (one’s) breath “in a low voice” is attested from 1832. To be under (someone’s) thumb “entirely controlled” is recorded from 1754. In addition to the idioms beginning with under