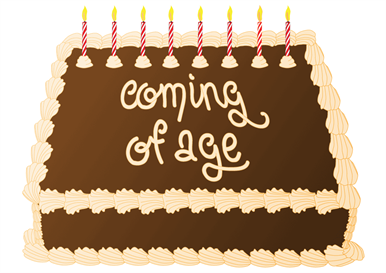 1Old enough, according to the law, to be eligible for something, as in In this state he’s not of age for buying liquor, but he may vote, or Next year Jane’s coming of age and will get her driver’s license. This usage was first recorded about 1430. The term under age signifies being too young to be eligible, as in It’s against the law to serve alcohol to anyone under age. 2come of age. Mature or develop fully, as in The school’s bilingual program has finally come of age. see act one’s age; coon’s age; golden age; in this day and age; of age; ripe old age; under age.