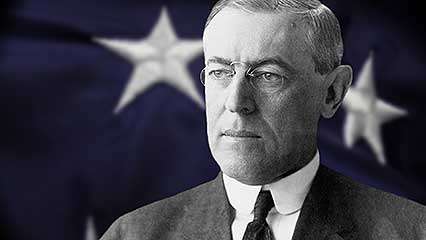 A political leader and educator of the late nineteenth and early twentieth centuries. A Democrat, he was elected president in 1912 after serving as president of Princeton University (see Ivy League) and as governor of New Jersey. Wilson was president from 1913 to 1921. He tried to keep the United States neutral after World War I broke out in 1914; his campaign slogan in 1916 was “He kept us out of war.” After Germany had repeatedly violated the neutral status of the United States, the country finally did enter the war in 1917, with Wilson maintaining that “the world must be made safe for democracy.” Wilson produced his aims for peace, Fourteen Points, soon afterward. At Wilson’s insistence, the treaty that ended the war provided for a new international organization, the League of Nations. Wilson was bitterly disappointed when the United States Senate later refused to permit the United States to join the League. He went on a strenuous speaking tour to convince the American public of the League’s importance. While on the tour, he suffered a stroke, from which he never fully recovered. In 1919, Wilson was awarded the Nobel Prize for peace.